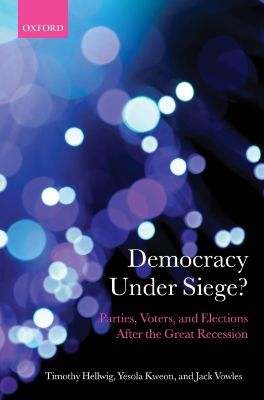 The Global Financial Crisis of 2008-2009 was catalyst for the most precipitous economic downturn in eight decades. This book examines how the GFC and ensuing Great Recession affected electoral politics in the world's developed democracies. The initial wave of research on the crisis concluded it did little to change the established relationships between voters, parties, and elections. Yet nearly a decade since the initial shock, the political landscape has changed in many ways, the extent to which has not been fully explained by existing studies.

Democracy Under Siege? pushes against the received wisdom by advancing a framework for understanding citizen attitudes, preferences, and behaviour. It makes two central claims. First, while previous studies of the GFC tend to focus on an immediate impact of the crisis, Hellwig, Kweon, and Vowles argue that economic malaise has a long lasting impact. In addition to economic shock, the economic recovery has a significant impact on citizens' assessment of political elites.

Second, the authors argue that unanticipated exogenous shocks like the GFC grants party elites an opening for political manoeuvre through public policy and rhetoric. As a result, political elites have a high degree of agency to shape public perceptions and behaviour. Political parties can strategically moderate citizens' economic uncertainty, mobilise/demobilise voters, and alter individuals' political preferences.

By leveraging data from over 150,000 individuals across over 100 nationally-representative post-election surveys from the 1990s to 2017, this book shows how economic change during a tumultuous era affected economic perceptions, policy demands, political participation, and the vote. The Comparative Study of Electoral Systems (CSES) is a collaborative program of research among election study teams from around the world.

Participating countries include a common module of survey questions in their post-election studies. The resulting data are deposited along with voting, demographic, district, and macro variables. The studies are then merged into a single, free, public dataset for use in comparative study and cross-level analysis. The set of volumes in this series is based on these CSES modules, and the volumes address the key theoretical issues and empirical debates in the study of elections and representative democracy.