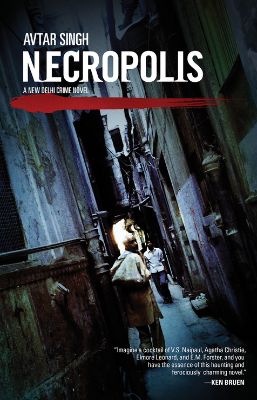 "Someone is cutting off victims' fingers in New Delhi and vampires and lycans are suspects in this ambitious mix of detection and the supernatural from Singh. " -- Publishers Weekly "Sajan Dayal, a Delhi detective, pursues a serial (though nonlethal) collector of human fingers. Dayal's team encounters would-be vampires and werewolves, plus a woman named Razia who may or may not be centuries old.

" -- Publishers Weekly , Spring 2016 Announcements "An intriguing mix of history, myth and the realities of contemporary New Delhi. . . Astonishing and satisfying. " -- Reviewing the Evidence "Superbly gothic. . . The novel is a compelling one and certain to be a great addition to courses on detective fiction and noir, especially given its focus on a city that has not necessarily or traditionally been attached to mystery and mayhem.

Singh is giving places like Los Angeles and San Francisco a run for their money in this re-envisioning of the urban noir. " -- Asian American Literature Fans " Necropolis is a ravishing beauty of prose that is as sumptuous as it is gripping. . . Imagine a cocktail of V. S. Naipaul, Agatha Christie, Elmore Leonard, and E. M. Forster, and you have the essence of this haunting and ferociously charming novel.

" -- Ken Bruen , author of Green Hell "I tore though Necropolis with great pleasure and a fair measure of unease. It's a grisly, wonderfully written novel that interweaves disparate genres and styles into a whole that satisfies thoroughly. As fine a crime novel as I've read in the last year. " -- Scott Phillips , author of The Ice Harvest "Avtar Singh's Necropolis is an ode to ancient, medieval, and Old Delhi, a romantic ballad that cuts across time, if not place, and melds features of classic detective fiction with those of the hard-boiled and roman noir in a style that is exquisitely the author's.

" -- Sumana Mukherjee , Mint Necropolis follows Sajan Dayal, a detective in pursuit of a serial (though nonlethal) collector of fingers. He encounters would-be vampires and werewolves, and a woman named Razia who may or may not be centuries old. Guided by Singh's gorgeous and masterful writing, the novel peels back layers of a city in thrall to its past, hostage to its present, and bitterly divided as to its future.

Delhi went from being an imperial capital to provincial backwater in a few centuries: the journey back to exploding commercial metropolis has been compressed into a few decades. Combining elements of crime, fantasy, and noir, Necropolis tackles the questions of origin, ownership, and class that such a revolution inevitably raises. The world of Delhi, the sweep of its history--its grandeur, grimness, and criminality--all of it comes alive in Necropolis.