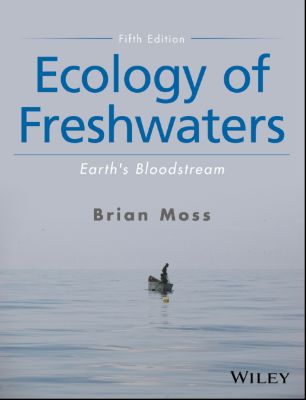 The new edition of this established textbook, now with full colour illustration, has been extensively revised and continues to provide a comprehensive, stimulating, readable and authoritative coverage of freshwater habitats, their communities and their functioning, the world over. The work will be of great value to undergraduate and graduate students, fellow researchers and water managers, and the plain language and lack of jargon should make it accessible to anyone interested in the functioning and current state of lakes and rivers.

Having taught and researched over fifty years and six continents, Professor Brian Moss makes here extensive use of his personal experience as well as the huge literature now available on freshwaters. This is the fifth edition of his textbook, which, since the first edition in 1980, has steadily evolved to reflect a rapidly changing science and environment. It places increasing emphasis on the role of people in damaging and managing freshwaters as we move into the Anthropocene epoch and face unprecedented levels of climate and other changes, whilst rejoicing in the fascination of what are left of near pristine freshwater ecosystems.

Professor Moss retired from the University of Liverpool following a career in Africa, the USA and the UK. He was awarded medals by the International Society for Limnology, of which he was President from 2007 to 2013, and The Institute of Ecology and Environmental Management. He was given The Ecology Institute's Excellence in Ecology Prize in 2009 and the book written for that prize, Liberation Ecology , was awarded the British Ecological Society's best ecology book prize in 2013.